Holy basil, known as kaphrao in Thai, grows really well in New Zealand. We infuse it in soy sauce with a little chili.

Bring a large pot of water to the boil. Once boiling, cook noodles for 4 to 6 minutes, until soft, stirring regularly.

Strain and cool under running water to prevent sticking.

Trim the top off the courgette, cut in half lengthwise and slice into 1 cm half rounds.

Remove any core from the celery and dice.

Peel and thinly slice the onion.

Peel and cut the carrot in half lengthwise, thinly slice on a 1 cm bias.

Cut the cherry tomatoes in half.

Cut the peppers in half and remove the core, then thinly slice.

Remove the basil leaves from the stalk and roughly chop.

Put a large fry pan (or pot, or better still a wok), on medium-high heat with a good splash of oil.

Add the onion and fry for 30 seconds, stirring constantly.

Add the carrot, courgette and celery. Cook for about 2 minutes. Add the pepper and cook for a minute.

Add the 3/4 of the Bangkok curry paste and fry for a minute before adding the cherry tomatoes and a pinch of salt.

Add the noodles to the pot along with the holy soy and mix well. Add the coriander and basil, taste and add more holy soy, curry paste, or salt, as needed.

Finish by sprinkling over with toasted peanuts.

Check out the latest culinary creations from the team at Green Dinner Table.

Delivered to your door on Sunday, April 5th. 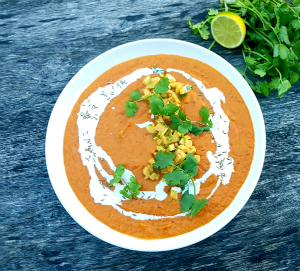 Select your plan and customise to your needs. Every Sunday we’ll deliver to your door your meal box containing fresh, local and responsibly sourced ingredients. Our resident chef Tom Riley creates the sauces, pastes, and spice mixes to take the hard work out of healthy and great tasting plant-based cooking.

Pause or cancel your plan at any time.